How to extend the rotor life of the European type impact crusher?

Previous: The precautions for the switch of the ultra-fine mill

Next: The model of desulfurization limestone raymond mill 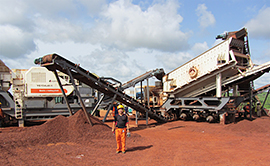 I want to buy a grinding equipment, what is the good recommendation? ...

What equipment is used for stone processing? ...

What are the advantages of Deep rotor VSI crusher compared with the traditional sand making machine? ...